Everyone who begins a new website with SEO aim HAS to go through the Google Sandbox, but it’s temporary and if you do things right, you’ll get out of it.

My goal today is to help you understand the following things:

So what is the Google Sandbox?

It’s an unofficial theory that basically says that for the first several months of a site coming into existence and trying to rank on Google, that it’ll undergo this “sandbox” period where it WON’T rank high, no matter…

Now that period, like I said can be several months and in the sites I’ve personally made, that period has been around 6 or so months in general.

There are cases too where that period is even longer and generally that applies to sites who do a bit too much affiliate linking or attempt to get ranked for really competitive keywords that already have a ton of websites ranking for them.

When I first experienced this, I was obviously frustrated, having to wait this long, but overtime, as I saw the same sandbox effect play out on the websites I’ve made throughout the years, I’ve become far more wise as to it’s importance…

It’s a theory because just about everyone who knows SEO terms and other processes to it, experiences it, including me and it’s unofficial because Google hasn’t officially talked about it from what I know.

But they do a lot of things to evolve and update their search engine, without publicly announcing it and it is a fact that there have many unannounced algorithm changes.

But if you’ve ever made a site and tried to rank it, you know it takes longer than expected (at first), even if you do everything right. Clearly, there is at least “some” truth to this theory and in fact, I happen to think it’s real because ever single website I have created with SEO intent always had a long period of months before it started to rank (as did anyone I know who also started in SEO) and that is proof enough of the sandbox existing.

But whatever is done by Google openly or in secret, we as webmasters see the results though (our rankings change) and all the stories say that it’s real.

While many SEO folks freak out, especially when they first encounter this “monster”, it’s really not a big deal.

Because as I’ve said how I’ve personally seen this particular thing play out again and again on all my sites and other on other people’s sites, I know how to proceed to get out of it so what I want to say is…don’t let the sandbox monster scare you.

Do the things I’ll be talking about shortly, and before you know it, your site will be out of it.

Next, I want you to understand why I’m not worried. It isn’t just because of experience and knowing that this thing eventually ends, it’s also because this system makes total sense if you gone through it as many times as I have…

There is no monster, and here’s why:

Google sandbox is in my opinion just another word for “website maturity”, where you simply don’t get that favor from them until your site “matures” or “grows” to the point where it can be taken seriously. And there’s many people who don’t know about this maturity period who get into SEO, don’t see fast rankings, and think they failed, or that this stuff is dead.

And frankly, there is nothing else that is as important. Think about the progression of a human being and their experiences. As they grow, so do their experiences and with that, their “authority” in the eyes of others grows too.

In my opinion, it is very wise on Google’s part to have this whole set up. A website that DESERVES to get more respect from the #1 search engine has to earn it and it has to earn that with what I said makes it mature: Content and time.

So let me show you how to get out of this thing: 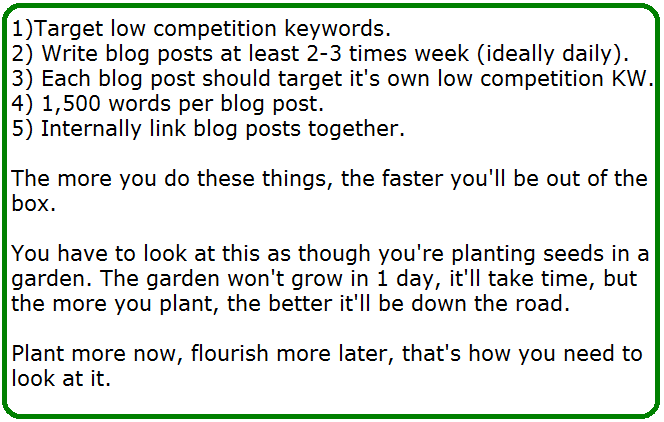 For the first few months that you are doing this, you ARE going to get frustrated waiting for this maturity thing to end, and you WILL see your rankings go crazy, but hardly every hit page 1, as you’ll be seeing a Google dance…

But no matter how chaotic or frustrating it gets, you HAVE to stick to those 5 tips, especially the tips about blogging frequently as well as interlinking those blog posts, that is huge.

That waiting period WILL end and when it does, the more of those things you did, the better your maturity will look in Google’s eyes. As such, you will see many more rankings hit their mark at top spots.

1 of them writes 20 blog posts in 6 months, while the other writes 150, by the time both sites are ready to cross that maturity point, Google will love the second site way more and reward it better, for obvious reasons, so that stuff I said about seeds plays a MAJOR role in understanding why during this waiting period, you can’t just wait, you need to work on the site and do those 5 things as much as you can.

While most people who don’t understand this thing will quit before the waiting period ends, you won’t because you know how it works now.

Once you pass that waiting period and truly see what I have seen again and again happen to websites that don’t let that waiting period stop them from growing, every future piece of content will now be classified under a much higher tier of ranking in the future.

Now that tier is actually something I talked about when I was explaining the Google dance here. Basically, sandbox sites go through the 2nd and 3rd tiers, while those who pass it following the guidelines I set, are in tier 1.

So stop worrying about this waiting period for your site. It’s there, it’ll be there and it’ll pass if you do what I told you to.

Here is how 3 sites of mine performed after they passed the sandbox period:

Site 1: For the first 6 months (pre maturity point), it was getting about 20 organic visitors. Post 6 months, it jumped to over 100 daily.

Site 3: During the pre maturity period, it was at 5 visits a day as well, then it jumped to 50+ visits daily post. And here’s one example of this:

And currently, this is what is going on with my HelpingHandSEO.com. I started it in late August of 2018. This article has been published towards the end of November 2018, which would make my site a little over 3 months old.

Given that I explained that the sandbox effect lasts for about 6 months, I’m still obviously in it, but I have 0 worries whatsoever because once again, I have gone through this many times, and it always turns out well when you follow those 5 rules I gave you.

Can a website go back to the Google Sandbox?

Here’s some context for this question:

Suppose a website left the Google Sandbox, is experiencing great rankings and traffic. Could such a site ever return back to that sandbox?

The answer is yes and here are the circumstances under which such a thing could happen:

Let me give you an example…

I had a page that I only wrote 12 articles on and it was getting some rankings after a few months and showing good potential. I stopped posting on the same page for nearly a year because I didn’t have time for it, and only recently did I go back to the same page and started posting again, and very frequently.

What I noticed is that this page went back to the sandbox, because despite the new, great content I was putting up, I was barely getting any rankings for it. This is a sign that the page went back to this grading period. But I am following the same guidelines I talked about to get it back out again (and it will). So the solution to this scenario is to literally do what I had been throughout this article.

Google penalizes websites generally for these reasons and if your page was hit with such a penalty (like Google Medic), then it first needs to correct the issue to remove the penalty, and then it must undergo the same grace period (Google’s Sandbox) to get great rankings again.

One option in this case is to start a new website, but that would also mean that this same new website would still have to go through the same sandbox, so you would need to decide if the said page which was penalized is worth saving or if it’s better to just start fresh. If a penalty hits a site that isn’t really big, I’d just recommend you start with a new one.

18 thoughts on “Google’s Sandbox is Real, But Here’s How to Get Out of it.”