There are 5 sites I’ve been growing through SEO and despite the talks of how this business is dead, I will prove why it is not so by showing their stats. 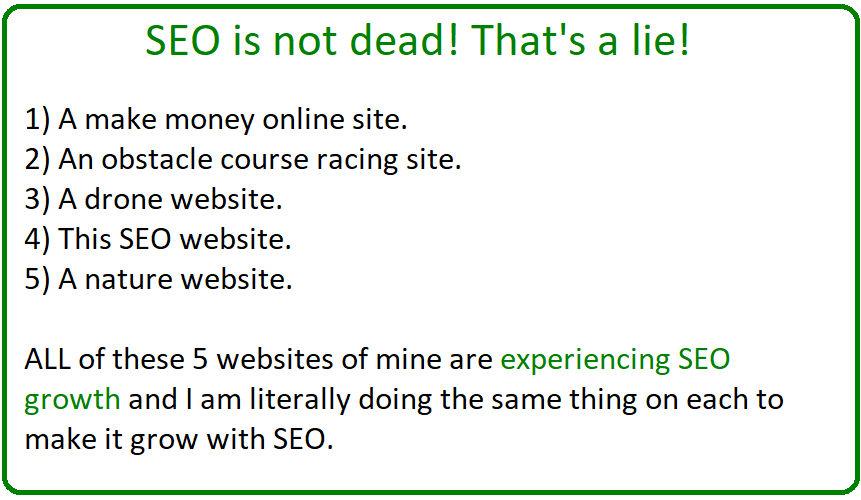 Not only that but there are countless people who I personally know who are also growing their traffic organically via Google search and through the very same legit strategies I’ll be showing you in this post.

These people, myself and the countless others are seeing results and if you also include the 100’s of millions of personal blogs that are also ranking high for big keywords on Google, how can anyone say that this method is dead?

Well I have an answer for that:

People have become lazy and/or misinformed about it.

They either understand or don’t understand that building a website to rank high organically takes both time and a lot of content production effort on their part to reach (It’s how the SEO trends work every year). If they understand this, they usually quit because they don’t want to work to reach this point.

They also don’t know or understand how the Google sandbox or the Google dance works and how it should be expected for any new site to experience for about 6 months.

And if they don’t understand this, they will usually try to “skip” this process by trying to build up their site through none white hat methods of SEO (Black & grey hat) which I am 100% against. The very fact that so many people used these bad methods for so many years was one of the reasons why Google was forced to make ranking on their search harder for people to see success with it in the first place.

2) And then there are the misinformed individuals.

People who are new or misinformed about SEO are usually not to blame for having this problem. To this day, I find a lot of misleading information on this very subject.

There are countless black hat and grey hat people going around and preaching about how success is easy on Google if people buy their “proven” guides or software programs.

There are also countless people who themselves are misinformed about this, but don’t know it, and preach about the wrong ways to do it, while also parroting other people who don’t understand it either.

One of the worst places I see this specific problem occur is in within the Quora forums. Sometimes I grab my head from reading the ranking advice people give out there and I know it’s going to lead people’s sites to ruin and I’ve tried a few times to provide the right information when I see the wrong kind given out, but I usually find that my advice is drowned out by people who are offering “easy” ways to do SEO and that is the advice that people asking the questions follow.

If you are just getting into SEO, know this:

Any brand new website can reach ranking success organically on Google if it follows a specific plan that I will lay out. It is the same one I’ve used on the 5 websites I’ll be talking about in a moment.

All of these 5 sites started as brand new pages, that I build up and they all went through the same ranking obstacles (the sandbox, the Google dance, the waiting time to see rankings pick up, ect…) and now, most of them are seeing high rankings, good traffic and the others which haven’t reached that point are set to, as long as I keep doing what to those sites, what I did to the ones that are experiencing the good results.

The process always plays out the same way if you know it and know what to expect. 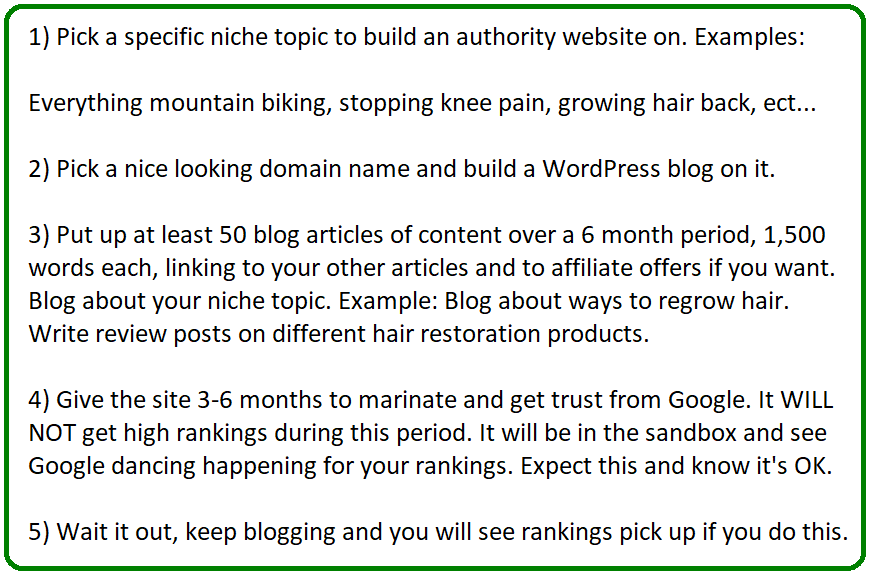 These are the 5 things I’ve done on the 5 sites I’ll be showing you and they are ALL growing as a result. And it’s just something I know to expect, which is why I know with 100% certainty that SEO is not dead.

Let’s get to the 5 sites, their rankings and offer proof of this:

What I will be doing is providing a screenshot of the organic traffic stats each site is getting, based off Google Webmaster Tools reporting.

While each of these sites are also getting traffic from social media and some from paid advertising, these particular graphs are showcasing ONLY the organic rankings the sites get from Google search, which is meant to prove how and why this formula works:

Currently, site 1 is my most successful and it was the first official website where I properly applied the same formula above. I use this site as the perfect reference for teaching people how to build theirs and I also used it as reference for the other 4.

I want to make a note with this site that I began seeing the good ranking results in about 3 months. However, I don’t post often on this site and it’s because of this that traffic is small. Yet, it doesn’t change the fact that by following the same methods, it’s still very active. I have a method of keeping sites improving in rankings even if i don’t post frequently that I’ll show you below, that helps keep the sites growing anyway.

The story with this website is the same as with site 2.

This may be the most ironic example of SEO out of all the sites, because it actually showcases this very website. Yet if you look at these stats, you’d think that I don’t know what I’m talking about.

Getting 1-4 clicks a day from Google and preaching about how to do SEO at the same time in this article seems hypocritical. But I can tell you that this site (HHS) is still a new page and that is why you are seeing these low traffic numbers.

The other sites above which are doing well, all started like this one and grew to the numbers you see in those screenshots, and the very same thing WILL happen to this site too.

I started HHS in August-September of 2018, and in this niche’s case, I had to wait at LEAST 6 months to see some organic traffic numbers to kick in, but…I expected this and it was only in March of 2019, that it began to slowly grow. In a few months, I’ll update that screenshot and show you the changes to prove that this expectation of higher traffic numbers was and will be an accurate prediction.

The last site out of the 5 is a perfect example of a new website that has been in the sandbox for a very long time and is starting to come out of it. The red rectangle and the time period it shows is what EVERY new website will experience and like I’ve warned many times: Do not worry about it.

This very site is picking up impressions and clicks and I am actually planning on building it up such that it may become my biggest website out of the 5. But the good thing about this example is that it shows how the slow growth (and actual growth) always happens if you follow the formula.

I also need to note that even if you follow this formula, while you WILL see results, not every single page will rank high and in those instances, when I see this happening on any one of my websites, I do the following 15 things that help improve that.

In the process, the rankings, clicks and traffic ALL pick up, almost 100% of the time!

So stop moping about SEO being dead, I proved it’s not true. Now do this:

Also one more thing I’d like to add is that YouTube has also become another major opportunity: