Since 2018, Google Medic has been worrying tons of bloggers and SEO people. I’m not one of them and let me share why you shouldn’t be either.

Let me just be honest in saying that I’m a bit late in explaining this particular update (almost a year later!) because until yesterday I didn’t even know about it. It was only through a blog post I saw mentioning it and all the panic accompanying that post that I decided to explore it further…

Yes, such an update can worry a ton of people, but when you consider the big picture of how SEO is progressing and the way people who are inexperienced always tend to inflate the impact of updates such as this one, then you will see that there may in fact be nothing to worry about…

Suppose I run a medical blog and give out medical advice, but I am not actually a medical professional. Should my site actually rank high on Google for medical terms, questions and advice then?

One could argue that answer is no because if my unprofessional advice reaches a large audience, it could perhaps endanger their health.

And that is actually a great segway and way of explaining what the GM update is.

It is basically an update which gives sites that provide content of sensitive nature, such as medical and health advice better authority and rankings, IF they are actually made by an expert or professional in the said field.

Suppose we take 100 websites, that talk about liposuction (a health advice blog basically) and they are all pretty large sites…

Out of those 100 websites, 2 are created by a medical professional, while the other 98 are created by regular people, some of which did or did not go though the liposuction procedure. Let’s say 50 of those blogs are by people who did go through the procedure, and the other 48 did not (You’ll see why these numbers are important shortly).

Through the GM update, here is how these 100 sites would rank:

1) The 2 blog websites which are actually made by a medical professional, would get higher rankings due to their professional resume being considered in the list of ranking metrics.

2) In my personal opinion, the next 50 blogs that would rank under it would be from the people who actually underwent that procedure. That lived experience adds better quality content in those blogs.

3) The final 48 blogs, would be ranked underneath the 50 blogs because they didn’t live the experience and their content is likely not as good as of those who did experience it.

Now it my opinion as to how these 100 blogs would be ranked according to the Google Medic update, but it makes a lot of sense if you think about the SEO nature of things.

Worried about GM? Here’s 5 reasons you shouldn’t be:

Let me quickly mention that blog post I read where I first discovered this update (here it is). If you read it, you will notice that a majority of the comments that blog got were either negative (reinforcing how horrible this update is) and most of the others are from people who are scared that their sites are now doomed.

1) There’s “no” official database to prove you’re a professional.

It’s more than likely that being a professional in your topic will give you higher rankings in the SERPS if you produce content that actually shows that professionalism, but let’s be honest…

If you’re a doctor and you start a medical blog, there’s no official place in Google where you go to “register” that you are who you are.

So if you are a current professional in a particular health field and you have a blog set up for this, just create an about me page or widget on your site that gives people a quick bio on yourself, so they know you are a professional.

And what if you’re not? Well…

2) Being a professional in a health field is more than just a certification, it’s about…

How well you show your experience through your content. In other words…

3) The quality of what you write determines the level of professionalism, PERIOD.

Since Google has no real way of “documenting” if you’re a professional in your field (point 1), the only real thing they have to go by is the content you produce and how the audience that reads it and then interprets it.

And here’s something to look for to make sure it’s doing well: 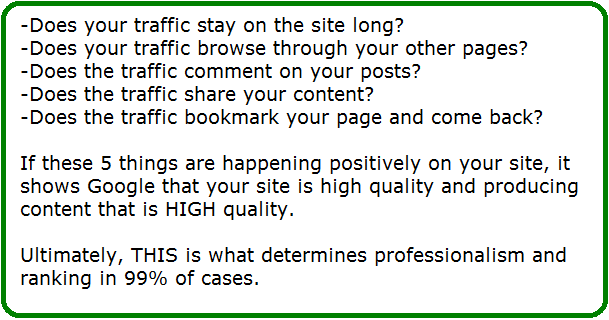 If the feedback is positive, it shows Google that you are an authority and professional enough to be ranked high to share this advice.

Sure when it comes to very serious medical topics, it’s very likely that your blog might not outrank something like WedMD or other major health blogs.

Or perhaps if you’re not a lawyer and you’re producing a blog with advice on law, odds are, a law blog will in 99% of cases outrank you. But…

4) People, there’s more space than you think to rank on to get traffic from.

So you may not be able to outrank a blog with better authority or a professional writing it, but guess what? There’s always spot on that list if you’re trying to rank on Google.

They either don’t know SEO at ALL or their sites are so new and still stuck in things like the sandbox, that they incorrectly associate their lack of success and results with this particular update (or another one, I ALWAYS see this, and I used to make this mistake when I was an SEO newbie).

Dig deeper into the people who complain about their sites losing rankings and you’ll usually notice the following things:

Like a doctor, I can deduce why a blog isn’t doing well and when I hear an see people complaining about updates like GM, I know from experience, it’s usually because of other (multiple) factors that they aren’t getting results.

The truth is one update is not going to break your blog and it’s rankings unless it’s actually producing bad content or trying to cheat it’s way around the updates (that’s what we called penalties and this is why they really happen).

So what should you do to make sure you aren’t hit?

Well rule #3 really summarized what I was trying to get across: Content.

Read my blog post on trends and this is what you should be doing on your blog to avoid Google medic hitting your site or any future or past update also affecting it negatively.

And for future reference, please avoid the panic that hits each time these new updates hit. I’ve been doing SEO for many years and focusing on the very trends I list in that link and each of these updates that hit usually produce me with HIGHER rankings, not lower ones. This is why I didn’t even hear about or worry about GM when I first heard of it.

Sure they can go up and down from these updates, but they DO solidify overtime and return to their usual high rankings or even rise up higher in many cases as well.

2 more Google updates you should know about:

Both these really add to the thesis the Medic update which focuses on authority sites in specific medical field niches having more favor in rankings. BUT either way, as long as you follow these 10 factors that Google likes to see, you should be update proof, and benefit from them in the future.

Furthermore, like I said earlier, if there’s ANY issues with rankings you have, use these 15 tips.

6 thoughts on “What is Google Medic? Stop Panicking SEO People!”