Negative SEO sucks. It’s what happens when you do the wrong things (or someone else does) that destroys your organic rankings.

In an instant, incoming traffic can vanish, your site can become blocked, and/or disappear entirely from places like Google. It’s an awful feeling and I’ve experienced this on multiple sites before and have grown accustomed to knowing WHY it happens, how to stop it and help you understand why it may be happening to your site too.

The fact is, many people who hear about negative SEO don’t really understand it well.

In my experience, there’s 5 reasons these things happen:

Online viruses can impact sites just as they can impact your social media accounts, your emails, your computer, your phone, ect…

There are horrible people out there who seek to destroy sites (they can even be hired to do this, which I’ll get into shortly). They basically look to see where your website is vulnerable (not updated enough) and then plant malware on it.

What can you do?

The solution to stopping this problem is to follow the steps I laid out in this article (#5). Do note, that the faster you resolve this issue on your site, the faster you can fix the negative rankings this issue causes.

2) Someone is hired to attack your site.

As hard as it may be to believe, there’s actually a whole industry based around negative SEO where people seek to destroy their competition through hiring shady folks to attack a competitor’s site. Here are some examples:

A person can get hired to send your website a ton of toxic backlinks, which can include links from adult and illegal website. The intention is that if Google sees a lot of backlinks from low quality sites linking to yours, they will assume your site is also a low quality one and they’ll punish yours for it.

There’s also the malware people I talked about above, who can also be hired to do this.

What can you do?

Typically if your site is updated and has some sort of security on it, you should be fine from most malware attacks.

If you experience a DDoS attack, contact your hosting company and they should be able to resolve it.

As for backlinks, you can’t really stop people from trying to destroy your site with the bad ones, BUT there’s actually good news in this…

Google has noticed that people do this and has thus changed how they look at backlinks, meaning that if someone sends toxic backlinks to your site, as long nothing extra comes of it (you don’t link back to them, there’s no comments or value coming out of it), they simply won’t use that as negative SEO against you.

This is why when I talk about backlinks here, I speak about the VALUE behind them being the important thing, not the link itself. There is also this recovery article you can check out on SEO.

3) You’re doing something black hat, whether you know it or not.

Do you know what this is? Well it’s simple…

Imagine that in order to get high SEO results, there’s a certain list of things you need to do. If you do them, congrats, your site gets ranked higher organically (ask the expert here). We call this stuff, white hat, and it’s pretty appropriate.

But black hat is a term used to describe you doing the OPPOSITE of all those good things and thus suffering the opposite, negative SEO consequences for it. Here’s some examples:

Firstly, know the differences between good and bad ranking practices (see the image above). Obviously, be on the good side.

Do not ever do or hire anyone to do anything on the bad side.

Nobody wants to have their content stolen an re-used. It is actually black hat stuff, but in this context, we’re referring to 2 things:

Both of these things are perfect ways to bring about the terror of negative SEO onto your website and you actually have control of not letting this happen.

With regards to the first issue…just don’t do it. You can’t get away with this.

And with regards to the second issue on comments, here’s my suggestion: 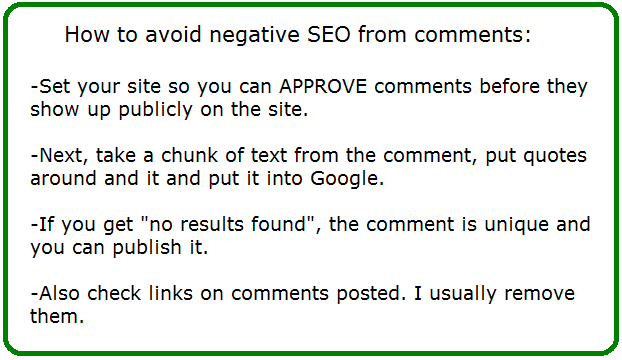 And finally, if you find a website or blog where the content is yours (stolen), you can sleep tight knowing that the site will experience it’s own negative SEO effects from Google, BUT you can take further action against the site, such as legally taking it down through what is known as a DMCA takedown.

5) You stop growing your site and the rankings fall.

In this last and final example, imagine all the white hat things I gave you an example of above and just imagine you stop doing them. You’re not even doing any black hat things, you just stop growing the site through the good methods.

In these situations, what ends up happening is that Google slowly decreases the authority and value of your website and this does lower rankings. It usually doesn’t happen quickly, but there is a declining trend you will see in traffic and that can be considered a form of negative SEO.

I’ll give you an example…

One of my website was actively growing because I was growing it through the good ways I explained. It reached a point where it would get to 300+ visitors a day.

Overtime though, my attention with the said site dropped and it was because I had more important websites to focus on, thus I could not dedicate the needed time to keep this one growing and by growing I mean posting more content.

Well over a period of several months, those 300 visitors, went down to 200, then 100, then 50 and now it’s under that daily. Here is the site I’m talking about the real life report of what I’m talking about here:

The fault is on no one else but myself and this is an issue that many people.

Many people who grow a website to a good level, become complacent, thinking that this status is never going to drop and so it leads them to make the mistake I did.

The solution to fixing this is to just go back to growing the website again. As long as the website was always doing the good things to grow in the first place, there’s no reason to believe that going back to doing that, won’t have the same effect it once did.

And one of the best ways to help with problem 5 is to do these things.

Have you had any of these 5 things happen to you?

While I’ve had my own personal experiences with negative SEO, I’d love to know if you had any of these same things happen too and if not, and your situation was different than what I described, let me know about it in detail.

Perhaps I can offer some tips to help you get back to having positive ranking results.

6 thoughts on “What is Negative SEO? 5 Types And How to Stop Them.”