I’ve always known that DMCA takedown notices on a website affect it’s SEO, but it wasn’t until I was slapped with one recently that I looked deeper into it.

In doing so, my knowledge of this particular issue grew far more and today I’d like to give everyone an encapsulation of everything I’ve learned on this specific subject. I’ll go over what happened to me (and why it was unfair), but let me cover:

What DMCA takedown notices are…

Basically, it’s a law that protects original content creators and creators of original images (also considered content) from being copied by other individuals and people without permission of the original owner. It’s basically considered property, digital property in this case. You can view a complete breakdown of DMCA here.

How they work and why they are important:

For example, say someone visits a website and likes a particular picture on it. They decide to save that picture, and then upload it to their blog.

In reality, nothing stops them from taking that action and without the consent of the original owner of that picture, the person can save it, but to use it on their blog would then be considered a violation and the original owner could then file a DMCA takedown notice to have that particular blog with the copied image removed from Google’s search.

Just as well, the original owner of the picture can take legal actions against the copier (I’m not a lawyer, but this is just common sense when you understand how DMCA works).

Now this also applies to people who copy video or text content from other sites and if caught, your site and video could be taken down and you could face problems. I’ve had one of my YouTube videos once copied in it’s entirety and I had to file a claim with YouTube to get that removed (which it did).

So basically, DMCA exists to regulate these potential scenarios (Which happen VERY often by the way) and to protect original creators from having their work stolen.

The SEO effect. What happens when a site or video is hit with a DMCA takedown?

Well…the said page which copied content or the video that was stolen from an original source is taken down. So the way that would work in regards to say…

Google, would be if a site was hit with this, Google would take it very seriously and remove the said copied content from their search results. This is a form of an SEO penalty.

If a YouTube video was hit with this, it would just be taken down and after 3 instances (strikes) of this happening, the channel where the content was stolen would be taken down.

Now let me go back to Google, because when this happened to me (I’ll give you my story shortly), my first worry was that my ENTIRE site’s SEO would be affected negatively by this, meaning…

If I have 500 articles on my site, and 1 of them is hit with a DMCA takedown notice, will the other 499 articles see lower rankings or disappearances in Google?

The answer is NO. The other 499 will not be affected, because they are not guilty of the “crime” so this is good news.

Now this isn’t always the case, because if the same site (with 500 pages) has multiple instances of copied content on it and is hit repeatedly with DMCA takedowns, then Google will assume the site itself is a repeat violator and will then punish it entirely.

But this takes me to an important point…

This happens A LOT. If you even look at this site by Google, they actually record the number of times this thing is filed (coming to 4 billion soon).

But I would bet many of those near 4 billion claims and take downs are falsely reported. Here’s situations where I’ve personally seen this happen:

An original content creator of say a product reads a negative review of their product on another site. They decide to file a DMCA take down notice simply because the review isn’t positive.

Or perhaps because they see an image of theirs being used on the said blog, they think it’s stolen (yeah I know, I said you can’t use other people’s images, but hold on, there’s an exception to that I’ll explain shortly).

Another example would be if a person doesn’t understand the rules of this and unknowingly and falsely files this report. Here, we’re simply talking about a lack of education on the subject and innocent bloggers and site owners could be in trouble for no good reason.

This is why counter DMCA claims exist & it’s what I filed.

Suppose someone, for legitimate or illegitimate reasons files a claim against your site/video. You have the right and option to file a counter claim against theirs to defend your position. Otherwise, people can just go around, filing claims over and over against legitimate sites that aren’t guilty of anything bad.

What happens when a counter claim is filed, is that the original accuser gets a chance to view this and decide if it warrants their respect or not and if not, they can escalate and take the issue to court in which case, the person who files the counter would probably have to hire a lawyer and probably settle the issue.

Now in regards to SEO, here is how that process works:

If you have a webmaster tools account, after a DMCA takedown notice occurs, Google will email you, letting you know that so and so URL which is accused of the copyright was taken down.

It will also provide you with a link to file the counter claim if you are absolutely certain you didn’t violate anything.

If you decide to go the counter filing way, you will need to fill in a form and basically detail why you are not guilty of the said accusation of stealing content.

The rebuttal will then be forwarded to Google, who will then take a look at it, consider it and if approved…

The next stage is that Google will send the counter claim to the original accuser, have them look at it and decide if they agree to it or not. And they have 10 days to do this, otherwise the URL in question is back up by Google’s search engine with it’s original SEO weight intact and at the same time, the original SEO authority the site had is restored, because it already got their green light in that it’s not guilty.

Very often, DMCA claims are sent out in bulk, meaning there’s people out there who mass accuse sites of this stuff and often, incorrectly, so if you feel that you aren’t guilty, I would definitely file the counter claim if you’re accused, your reputation as well as your SEO is on the line after all.

What happened to me, the story finally explained:

Now that I’ve laid out the most important parts of this subject, allow me to finally explain what happened to me: 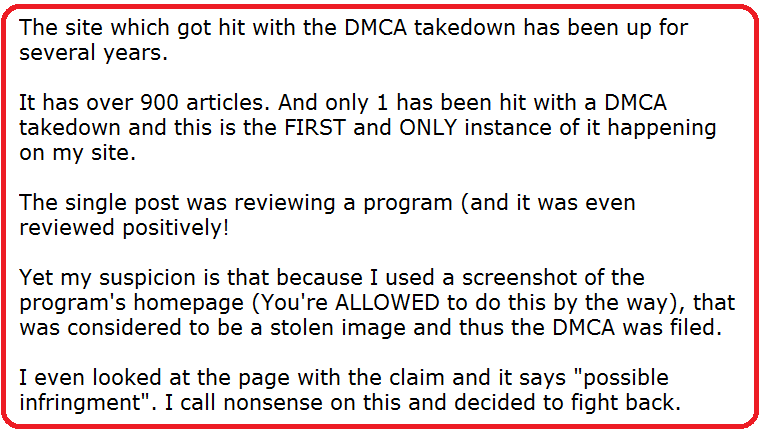 Plus, why have this bad mark on my site’s SEO? I’m innocent of this and want to maintain my high rankings, thank you very much.

I decided to file the counter claim and today is the first of 10 days that the accuser has the chance to respond. I am certainly hoping for a good outcome, because frankly, there is literally nothing that they can latch onto to further their claim, but after 10 days, I will let you all know the outcome.

Ways to avoid a the takedown notice:

Perhaps I’m not the best person to say what to do in this regard, but let me tell you, anyone can be hit with this, even if they do everything right, like I did. Never the less, know these following things, apply them and you should be fine in 99% of cases.

Should the situation where a claim is filed against you occur, you can defend yourself and have all the right reasons to reverse that claim and fix things: 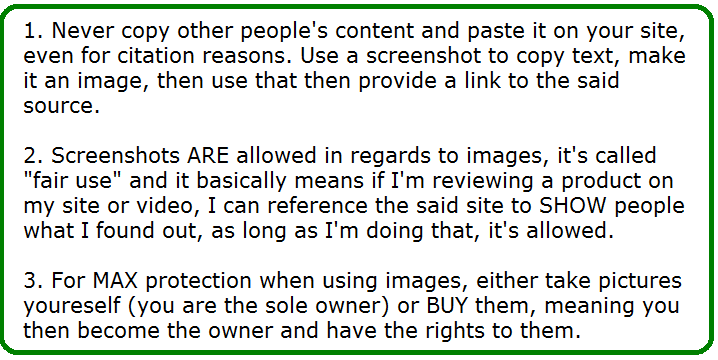 In this last section, I want to mention that if you own a blog and create your own original content, to not be so paranoid about other people copying it and having to scour the internet in search of any sites duplicating your work.

And that pretty much provides all I wanted to say regarding DMCA and related topics to it. If you’ve personally experienced what I have and you’ve been able to reverse it in your case, let me know your tips for that.

This is a good law that exists, but there’s people who can incorrectly use it or for false reasons. But now you know how it affects SEO and when and if you should fight it.

The promised update: What happened after 10 days…

As I said earlier, I contested the DMCA takedown of one of my articles and was told by the Google response email that I’d get a response in 10 days (if it was uncontested) and my article would be re-indexed.

And hence, 10 days passed, so what happened?

Well the original person or company that filed the issue didn’t say a word, and so my article was “reinstated”. Now while that is GREAT news, there is a “counter” to this:

The article originally ranked on the first page of Google and after it was taken down, it obviously lost that ranking. Now that it’s been reinstated, I had hoped that it would return to the spot it was in before it was taken down.

Sadly this is not the case, and it’s currently on the 3rd page of Google results for the same keyword it originally ranked for on the first page so I will be doing these 15 SEO things on it to help. There’s nothing really I can do about that other than keep doing these sorts of things on that article and hope it climbs back up.

So while I am “victorious”, sadly, the victory comes with it’s own steep SEO climb I have to embark on again.

4 thoughts on “Does a DMCA Takedown Affect SEO? Yep, But There’s More.”