It’s officially been announced that Google Plus will be shutting down in a few months, with no exact date specified. How will this affect people who do SEO? 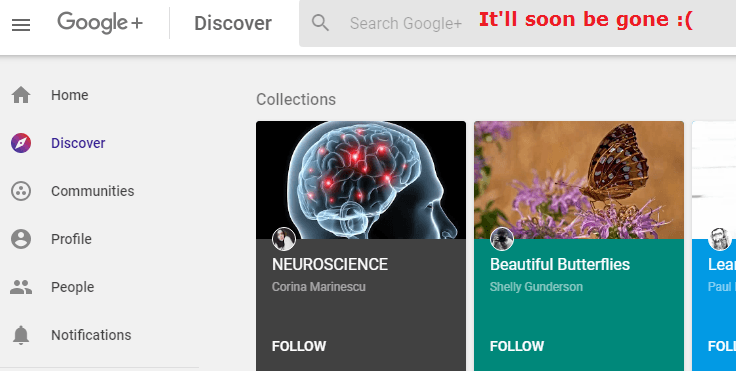 I’ll explain and give my answer to this question in a moment, but let me explain what is going on in case you missed the announcement or don’t know why this is happening:

You can get more details on this social network’s shutdown here.

But through this shutdown, various things are happening:

And it’s the latter topic I want to address, because there are a lot of website owners who are (or did) use this network to get their websites ranked higher. What will happen now?

Let’s answer the SEO question, does this shutdown affect it?

-If you had no big following there and the content you shared from your site in this place had few to no likes and no comments, or shares, then it’s really not a big deal.

-If you did have a big following though in that place, did get a lot of likes and shares from the content you shared, it will probably slow down your ongoing SEO work, but it’s not a catastrophe either…

Let me further explain all the angles of this so you don’t freak out:

Google+ itself in my personal view was an awesome way to boost your site’s organic rankings. Sharing content you put out socially, especially on this network gave you faster rankings, that is if that content got a lot of likes and shares and it was my personal hypothesis that social points on THIS network played a more favorable SEO role than social points through other networks. Backlinks in my opinion from Google Plus helped a lot more than backlinks from say Instagram.

But with that shutdown happening, this option, this ability to boost your rankings organically will soon be gone (or it is gone if you’re reading this article post shut down). But is it really that big of a deal?

Well I already explained which groups would “suffer” from this shut down above, but in all honesty, even if you are in the group of people who would suffer the worst consequences from it, it’s not the end of your rankings, you simply need to adjust and while it will take time…

3 ways to cope with the shutdown and maintain high SEO results:

is that using social networks isn’t the end goal (it’s a bi-product), it’s working and growing your site content that determines it’s success in search engines. Do these 15 things and you will not need to depend on a social network, it’ll handle itself.

95% of all of my website’s success with search engine rankings came from understanding this point and using it. Social sharing was just an add on feature.

Sure people who have large followings on social networks and get a lot of praise, comments and engagement for the content they share DO experience higher rankings on search engines (these are good ranking factors, and so are these), BUT so does (if not more) growing the site itself and you can honestly get high rankings with just focusing on content creation and even doing 0, yes 0 social network marketing of that content.

I say this with FULL confidence because this is what I’ve experienced on multiple sites I’ve grown from 0 to 100,000+ visitors yearly.

Now don’t mistake this with getting social shares, comments and engagement in other networks outside of search engines. I’m not talking about, I’m strictly talking about rankings on Google.

And I am also NOT discounting the value of social networks have on search engine rankings. They have a good impact on it, but content creation is a more important role.

Well that makes you the one who will be hardest hit by this shut down and yeah, I definitely understand your loss and frustration, but it’s happening and you need to adjust. But how?

Well before the shutdown is permanent, I would suggest (if you have a big following on G+), to create another social page elsewhere (I’d suggest Facebook, or even Pinterest, or even both) and funnel your existing G+ followers there, so they can keep up to date with your new content and this way, you’ll basically salvage this event and make the most of it.

3) Additionally, I would consider starting an email list and funneling those G+ followers there.

An email contact in my opinion has more value in this case, because you can communicate more personally with your followers and share your content with them there and get their engagement for it still.

This doesn’t mean you should do this instead of setting up a new social network account and building your following there, no, just do both if you want, but this is another, add on option to go with.

Existing rankings from G+’s help. Are they affected?

Suppose you managed to get pretty high rankings thanks to getting great social recognition of your content through G+. Will this shutdown remove those points?

Well my opinion is that it will, however, and more importantly, it isn’t just the points this network gave your content that made it rise in rankings, there are a host of other things which led to it, and even if this shut down makes you lose those points, you will still have other ranking factors to rely on to maintain your existing rankings, things like: 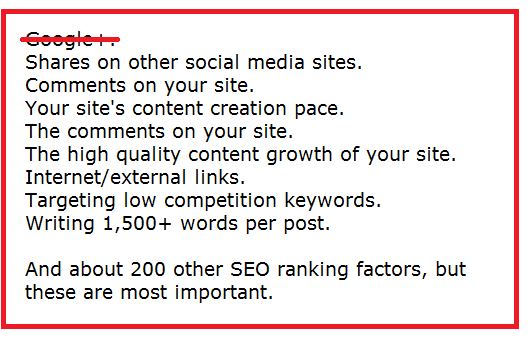 The point of that image is to show you that even if 1 thing falls apart, you still have MANY others to rely on and that should be your SEO safety net. Because I focus on the other things I listed in that image above, I am not worried about this shut down, as I can still get high rankings without G+’s help.

That’s how I would look at this whole event and more importantly look forward, beyond it and know that it’s not the end for your site, not even close.

2 thoughts on “How The Google Plus Shutdown Affects Your SEO.”