Of the many SEO rumors that swirl around, one of them is that buying expired domains helps SEO and the truth is, it doesn’t. 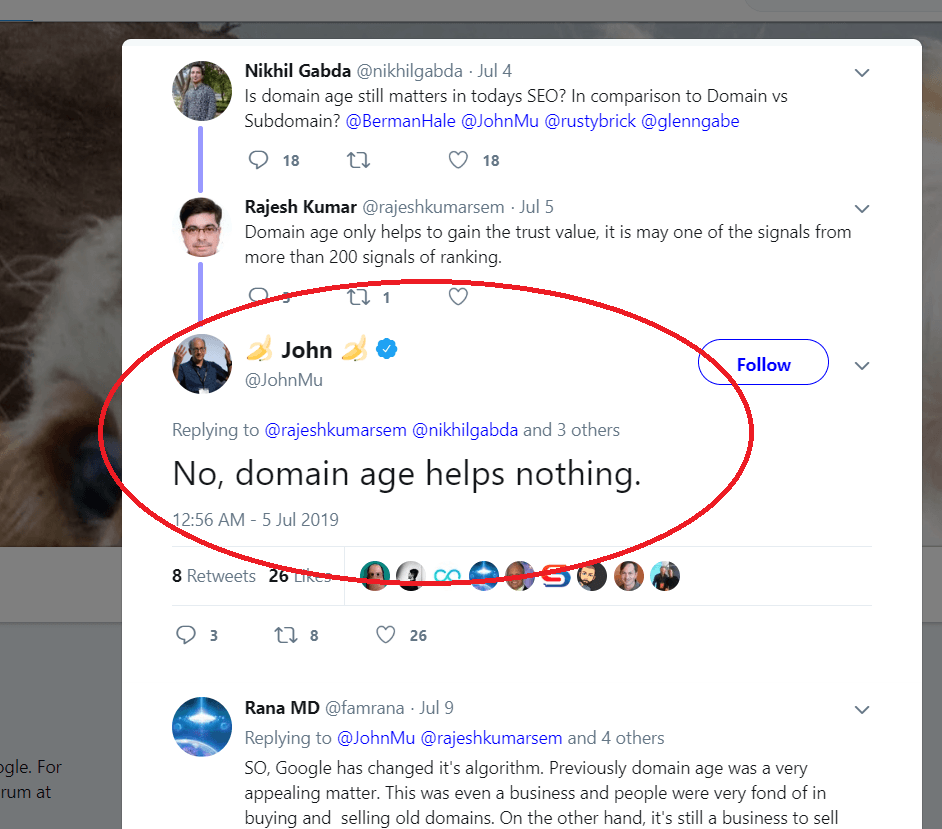 In fact, John Mu of Google itself is the one who basically put that myth to rest when he was asked about it on Twitter. Here was his response:

Now that response isn’t exactly a subjective one, it’s pretty clear: It doesn’t help and here is the link to that message on Twitter.

But in this article, allow me to add reasons as to WHY this is the case. A long time ago, I believed buying expired domains had LITTLE value, and said it wasn’t worth it.

However, my reasoning was a little bit different and after seeing John’s response, I can add one more con to not buying them. But as for the details as to why, that’s what I’ll get into…

The short explanation about this myth is that when a website is new and basically under the age of 6 months, it will be sandboxed for at least that period of time.

During this period, it will not be ranking well and as I explain to people who are stuck in it, you can get out of the sandbox if you wait it out and do the proper things like these.

After the sandbox effect subsides, the domain name then becomes “aged” basically in that it will no longer fall under the trap of the sandbox and rankings will just come easy, and thus with this whole concept in place, comes the topic of buying aged domains…

People believed that if they buy a domain, age it to the post sandbox period or just let it stay around for many months and years, that it’s age will raise its SEO value and they’ll be able to sell it for a higher price.

And the people they sell it to, will think they can just avoid all those months of “waiting” for the rankings to finally kick in and just start from a post sandbox point and get “immediate” SEO success.

Theoretically, with the whole sandbox topic in play here, this whole operation technically makes sense and I’d argue there may have been a point years ago where this could have been true, but after thinking about it and considering John’s answer, I can tell you why it detail why it won’t work…

There are 2 scenarios in play here to explain why this is the case:

First, if we take someone who buys a domain, and doesn’t do anything with it for say a year (way past the sandbox period), then it’s still an empty site. It has at least a year on it and is technically aged, but without content on it, anyone who buys it will still have to start SEO from scratch.

They will have to post new content, grow the site and this process will itself put them in the sandbox. In other words, it’ll be inevitable.

And second, if we take someone who buys a domain and actually builds a site on top of it, then it will rank well after 6 months, BUT if that person decides to JUST sell the domain itself, that’ll mean that they’ll have to basically erase/throw away all that content, meaning the page will be completely empty all over again, and that means, the website will lose it’s authority in Google and will have to start anew with whoever buys it.

I can tell you from experience that I have built websites from nothing, into authority pages and when I left them alone for a long period of time, the rankings DROPPED, all the way to the point that I would basically have to “re-climb” the ranking ladder all over again if I decided to try and build up the page.

Well if you take that experience, and go even further to the point where selling the page means erasing all it’s content, what do you think it’ll do to all the authority it’s accrued?

It’ll ERASE it and basically give it a blank SEO slate.

And after someone buys that page, guess what happens? Yep, they’ll have to restart the whole sandbox process again, so there’s really no winning with regards to this subject.

Here’s the only time that this method will work…

The only time that buying an aged domain holds merit is when that website has content on it, and that content is already ranking on search engines. Then when the person buys the website, they aren’t just buying the domain, but they are also buying the content on it and all the work that was put into growing it.

That operation will allow the next person who gets it to “take it from there” and continue growing the website, but the prices for these kinds of websites can be astronomically high.

However, there is an important MINUS to this method, and that is if the page has negative SEO history on it. If you intend to buy a website that is already built for you and is ranking high, make sure it’s SEO history is clean and not full of penalties.

If you’re going to buy a domain, I wouldn’t let it’s “age” be the reasofsn you get it. You’ll just overpay for it and then will have to start anew like anyone else would if they purchased a brand new one. And if the other major reason you wish to get it is because of it’s name, I still think you’re better off getting a brand new one, and you can easily get yourself a great domain name using these tips.

For me personally, I love getting brand new pages and building them up with the ranking strategies I know that work (here they are). It’s the safest approach, but it takes time. I have learned not to try and shortcut my way through the ranking process and that it’s worth doing it the right way.