There are big differences between SEO and SEM and I have seen many people incorrectly assume both terms are the same. They are related, but not the same. 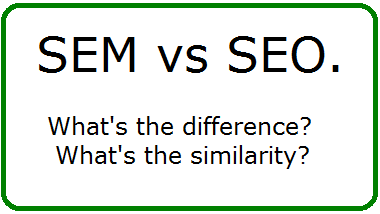 Here’s all you really need to know:

Here is an example of SEM:

How many search engines do you know exist?

Most would probably be able to name at least 3 and Google would be one of them. Well there happen to be more than 3 and social media sites like Facebook also technically count as search engines because you can look up different things in their search bar, besides people.

Whatever the case is, there are many, and on each of them exists it’s own way that one can market sites on them. You can try to rank organically on each of these search engine and you can even create ads to also do the same thing.

Well SEM basically encompasses numerous and even all the ways you can market on every single search engine that’s out there so when someone says they are an “expert” in this field, assume that they know multiple ways to market on different search engines.

An SEM expert could be someone who knows…

With SEO, it’s a very specific branch of SEM:

With this topic, you’re limited to pretty much marketing websites organically on the 3 main search engines, and Google is the main one. But the good news is that properly using SEO on Google will itself automatically help with that same stuff on other search engines. See an example.

Now that’s not a bad thing at all, considering how HUGE of an industry this is and how much money can be made from it if you understand it.

My experiences with people who have done both things.

It’s very hard to become an expert in these particular topics and I have read, spoken to and listened to the advice of people in both fields, and I have to say that most of the time, the experts aren’t really experts.

When I read what they write, or what they say through a video or in person, I can tell just by the text or words, how experienced the individual is and based on the experiences I’ve had, maybe about 20% of all people who say they are experts in one or both fields, and actually be that…

Usually the people who aren’t good, will VERY broadly explain what they do and frankly, being that are supposed to be”marketers”, you’d think they’d know how to relay their job titles in a way that was more attractive but they don’t…

I’m going to give you 10 different scenarios and the idea is simple, just respond with whether the scenario is related to one topic or the other…

1) A person says they make websites and rank them organically on Google.

What would you say the person does here? If you say it’s either one or the other, you’d be right, but specifically, it’s SEO.

2) A person makes websites and then markets them on Google Adwords.

This would be an example of SEM then. Anything with ads and paying for them on search engines would also count as this.

This isn’t Google anymore, so what would the answer be? It would still be SEM because there is paid online advertising going on, despite it being on a social media site.

4) A person tries to rank sites organically on Bing.

This would most definitely be SEO and the keyword there is “organically”. As long as you see that word and it’s in relation to search engines, that answer will always apply.

5) A person tries to rank organically on DuckDuckGo.

If you’ve never heard of this place, it’s also a search engine. It’s not gigantic, but it has a growing number of users because it doesn’t track them while giving them the same kinds of searching experiences and results Google would.

Either way, if someone were to market on this search engine, it would also be the same answer as #4.

6) A person tries to market on Yahoo (organically).

You saw that keyword again, so you should already know what form of marketing it is (same as #4, and #5).

This is a trick question and the answer is that it’s SEM because there’s literally no organic search engine marketing going on here. It’s a social media account and usually people who have these will use paid advertising to drive people to it to grow the page.

8) A person runs Google Adsense on their site.

In this example, the answer is NEITHER. Why? Because you’re literally not marketing in ANYWAY on a search engine, you’re marketing on your website, which is completely different.

9) A person gathers emails on their site.

Same exact answer as #8 (neither), because again, the marketing is WITHIN the website, not on a search engine.

10) A person sends emails to their subscribers, across Gmail, Hotmail, ect…

Again, this is an example of neither, but the only difference is that it’s not within a search engine or within one’s site, it’s on email platforms, which count as neither, but that too has it’s own marketing strategies.

So many options, where should someone start?

With all the various ways one can market online, it’s easy to be at a crossroads in choosing where to start. I personally began with marketing on a popular site (not a search engine), but then later moved into doing SEO more seriously and I recommend it be the starting point for most people.

If you can learn how to market organically on say a search engine like Google, then the great news is that the results you have trickle across other search engines and give you more results that way, being that Google is #1.

2 thoughts on “The Difference Between SEO And SEM Simply Explained.”