Google’s E-A-T update is one of many that has site owners worried about it’s affect on their rankings and SEO. However, let me help explain why it’s a good update.

The truth is, every single one of these things Google puts out is nothing really new, and it’s all aimed at trying to filter out and push better content to the top rankings (like mine), whilst pushing down bad content and/or those people who try to cheat their way through SEO, down in the rankings.

This has ALWAYS been the case (I’ve followed SEO trends for over a decade and I can tell you, the goal has always been what I just said), but because each time a “new” update comes out and it’s always labeled under a different name or abbreviation (such as E-A-T in this case), there’s masses of people who think it’s something totally new and flipping the rules of SEO.

It’s not, it’s just continuing along the same line of evolving the current SEO model and as long as you do white hat related things (I’ll go over them), there’s 2 things you can expect:

That has been the case with me and anyone I know who follows the white hat rules of SEO. And the truth is, as an SEO person, each time a new update comes out from Google, I either scoff at it or don’t even bother worrying about it until the rumors of “how bad it is” catch my attention, I go to investigate and I end up coming to the same conclusion that I’ll be giving you here:

It’s nothing worth worrying about unless you’re not a white hat person, doing white hat SEO things. In the case of E-A-T, I’m literally only hearing about it almost a year after it’s been released.

What is Google E-A-T?

The abbreviation is as follows: 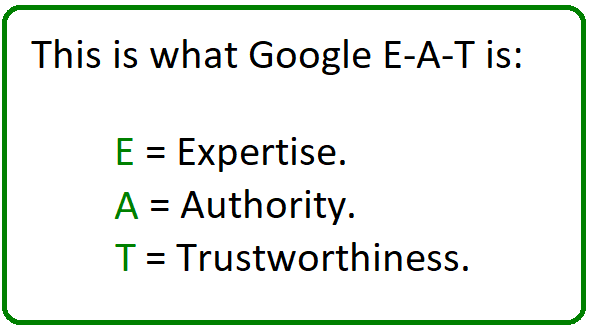 The site, it’s blogs and pages have expertise (E), authority (A) and trustworthiness (T). Now while the specifics of how this is determined is a secret, as I’ve said before in covering other updates like the Google Medic, a big reveal that I have come to realize a long time ago is that Google determines much of this stuff (quality content and if it falls within the E-A-T standards) through this:

Most of this stuff is determined by how people visiting your site view it.

The better a person visiting your act behaves on your page/s, the more it means that the quality of your content is higher. You see a big part of understanding SEO and making it work for you is understanding that it’s really based on how a person likes your page and this is what lets Google know it’s quality.

In fact, all of these updates you see Google go through every year is just one evolved way of measuring this after another. They release an update, some sites get pushed higher, they track how readers view these sites and then make adjustments. If they see that readers like a majority of the sites that were pushed higher after the update, it shows that the update itself was a success in doing the following:

In fact, this is almost like their mission statement and they LITERALLY talk about this on their webmaster blog here. They ADMIT to experimenting with their algorithm to make this mission a better success and each update is designed to bring them closer to this outcome.

You know, I have to say that while there’s many authority blogs out there which preach on how SEO should be done (including mine), I am surprised how MOST of them hardly ever mention Google’s webmaster blog itself (I do and I’m proud of it!).

It is literally the source and most trusted one at that which talks about what Google is seeking to do and yet most of these people and bloggers ignore the very source that determines their site’s and blog’s rankings and just head over to other places which often steer them into the dark world of black hat marketing (and those are the ones which these updates destroy).

Will E-A-T reward or punish your site’s rankings? A good way to tell:

What I’m about to tell you about this update is literally nothing new. This has been the advice I’ve given to every single blogger and website owner who has asked me how to prevent an update from hurting their rankings.

This is because I consistently stick to the point that all these updates have the same mission in mind (Better quality sites rank better, period.) and each new one released is just meant to keep that evolution going. There’s literally no change in the SEO rules, it’s just the same goal, continuously done better.

So with regards to how your site will do, here is the rule of thumb:

Let’s run 3 sites through the Google E-A-T update (so you see how this works).

Site 1: Is a few months old, does black hat marketing, produces low quality content and tries to cheat it’s way to the top rankings. It initially gets away with this, gets high rankings and traffic, but that traffic doesn’t really stick around long (black hat sites typically produce bad content).

Site 2: Is also a few months old, but is pretty opposite to site 1, has good content, produces it frequently, and aims to adhere to the E-A-T standards.

Site 3: Has been around for over a year and basically does the same thing site 2 does, but it’s been doing it longer.

How would Google and the E-A-T update rank these pages? Simple:

Site 2 would rank below that, but would still be in the sandbox. Yet, if given a few more moths, it would be set to become as good as site 3 if it continued along the same path because it would be out of the sandbox and getting higher rankings. By the way, the sandbox is one of Google’s most common algorithm limitations it puts on all sites and has them stay in it for up to 6 months, so don’t mistake bad rankings early on with some sort of punishment from this search engine.

I have found that the people who worry most about these updates are people with new sites or those who have new sites but try to do the type of stuff site 1 does, and they should be worried.

However, the people who think long term and do the right things with their pages are the ones who ALWAYS benefit from these updates and will continue to do so.

Let’s run a little experiment (and I need you to be a part of this):

Allow me to run YOU, the reader right now through the same E-A-T standards by simply asking you questions about this very article you’re reading now:

Does reading this article make you see or think that I know what I’m talking about regarding SEO? If the answer is yes, then I already have the E part down (expertise).

Am I writing this article in a way that is giving off the impression that “I’ve been there and I know this”? If so, then the A is also down (authority).

Am I giving you great, free information that is answering your questions and calming you down about this update? If the answer is yes, then the T is also handled (trustworthiness).

Has E-A-T affected my blogs and sites? Nope, it’s either the same or better ranked now.

In fact, other sites I check up on regularly seem to also have their rankings the same. Since this update came out last year, I have noticed an improvement in traffic on some of my bigger sites, but that was also because I was adding content frequently, so there might not be a correlation here.

However, what I can say is that E-A-T did not negatively affect any of my blogs, including this one and if you follow my advice, it won’t affect yours either. It may in fact, do the opposite and help it get more traffic 🙂